You’re Invited! – The Haliburton, Kawartha Lakes, Northumberland Drug Strategy will debut a short film highlighting the recent Northumberland Unity Project at Venture 13 in Cobourg on Monday, November 18 at 7pm. The film screening is part of a special event hosted by Green Wood Coalition that will feature a talk by Dave Meslin, author of 'Teardown: Rebuilding Democracy From the Ground Up'. 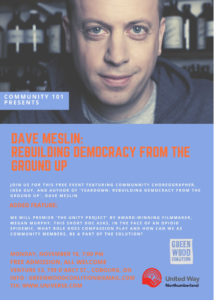 Unity Project was an interactive art installation that members of the public created on Saturday, September 14 to visibly demonstrate who makes up our community and how we’re connected. Participants tied colourful yarn to poles that reflected their identities. As each person’s yarn intertwined with others’, a colourful web rose up, illustrating the community’s diversity and inter-connectedness.

All of this was captured on film by award-winning filmmakers Megan Murphy and Jeremy Kelly. The ten minute movie captures the community spirit that was on display on as more than 100 people came to Rotary Park in Cobourg to weave a colourful web of unity. The film also features interviews with participants and community leaders reflecting on how social connection can serve as the antidote to the overdose crisis.

This is a free ticketed event. Tickets can be reserved at: https://www.universe.com/events/dave-meslin-teardown-rebuilding-democracy-from-the-ground-up-tickets-7HDCP8?ref=explore&fbclid=IwAR0pjzEvnLAmBK_UMt84s264cfTgedl6QgKnY0JowHduQU-f-Li1R8RomZI.

For more information, please contact Megan Deyman at 705-559-6330 or coordinator@hklndrugstrategy.ca.